It’s Saturday!  I don’t normally schedule posts for Saturdays because most people are out doing their Saturdayweekendfunfamilyandfriends type things and aren’t worried about recipes or what they are going to eat for the day.  But, just in case you’d like a little Saturday bread project, this could be right up your alley.  I don’t know about you, but there are some days that I love a good bread project.

If you’ve never met a challah (pronouced ha-le) loaf before, you’re sure to become instant friends.  Around our house, we call this cloud bread, mostly for its shape.  But, it stands true for the texture as well.  It’s like buttah.  Challah has a nice shiny crust, but a soft and fluffy center.  And to make it even better, this one’s got blueberries, too.

I hear there are some people who are still using sandwich (loaf) bread to make french toast.  I beg you to stop that right now.  Make this bread and THEN make french toast with it.  It’ll change your life.  Well, it’ll at least change the way you eat french toast. 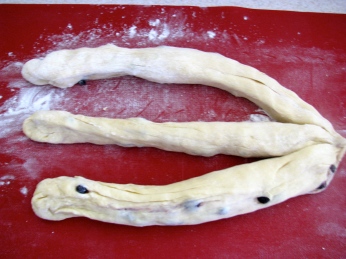 5. Let rise and bake in the 375 degrees F oven for 25 to 30 minutes, or until turns golden brown. Remove the bread from the oven, brush with melted butter immediately. Transfer to a wire rack to cool down.

On a side note, there have been over 1000 visitors to this little site!  Amazing.  I started this for fun and I’m so glad that others are enjoying it and using it as well.

“Find something you're passionate about and keep tremendously interested in it.”

I'm Mandi, the one behind the screen scouring the cookbooks, magazines and internet for the best recipes to share...and eat. Thanks for stopping by.

Thanks for Stopping By...